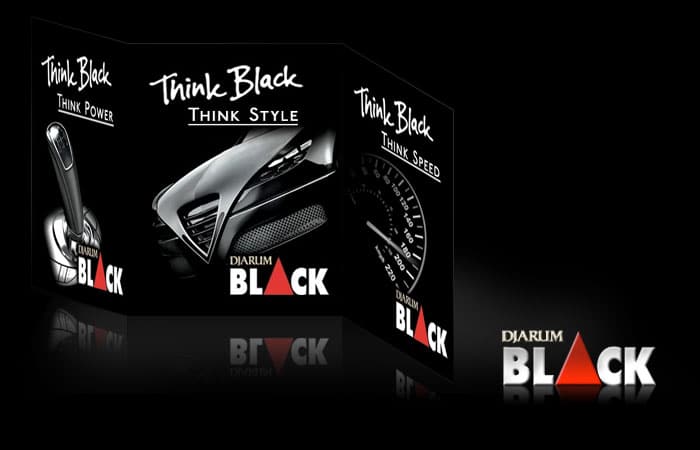 With 25 Mg Tar and 1.6 Mg Nicotine, give you the real Indonesian cigarettes.

Djarum Black is a filtered kretek cigarette known for its spicy, bold taste and aroma. The finest natural-grown tobacco and cloves are combined with a specially designed concoction of additional enhancements to create its distinctive spicy punch. Djarum Black Regular was the first kretek cigarette to feature a black paper wrapper.

Since launching in 2001, the Djarum Black series has become synonymous with innovation. The product series, which began with the Djarum Black Regular, has since launched several other popular variants. Its reputation as a smart, unique and creative brand swiftly gained in popularity among the modern crowd.

Author’s comment “Djarum Black is a very well known world-wide brand, and you can find them in many different styles and sizes. This Djarum is one of our favourites because of it’s distinctive black box. The cigarettes themselves are black too, so if you’re trying for a gunfighter image, this might be the smoke for you. The cigarette is heavily flavored with clove…you can even taste it on the paper before you light up. We found the aroma and taste quite pleasant, although a little much for smoking steadily, day in and day out. Rather like an after-dinner liquor…you probably wouldn’t want it as a constant diet, but for a once-in-a-while change, it’s rather good. The tobacco in the Djarum Black is mostly dark leaf…some of the shreds were nearly black. It is packed very tightly. In fact, we could not compress it at all by tamping. (The first time we’ve run into that.) It is slightly longer than king size, but also slightly more slender. Be careful when you light up…the combination of the clove and slightly stronger tobacco flavor can give you a bit of a coughing reaction, but if you adjust your inhaling accordingly you will definitely like it. The combination of tightly packed tobacco and smaller drags make this one very slow burning. Make sure you’ve got a few minutes if you plan to finish it.”

Djarum Black is the first clove cigarette in the world that uses black wrapper. Launched in 2000, Djarum Black offers a very unusual innovation in Indonesia, tar levels above 20mg with slim body and black wrapper. Djarum Black is a primadonna in the world of cigarettes in Indonesia, where in this case Djarum Black is actually a product intended for export only. With kretek flavor adjustments that tend to be accepted by many people, especially foreign consumers. Djarum Black  is able to thirive in foreign market because there are still many clove cigarette enthusiasts who are happy with the unique taste offered by this superbly crafted kretek. With a dominant taste of cinnamon that is unique and rarely used in cigarettes that offer such flavor. Djarum itself according to Euromonitor report in 2016 controlled the market in general as much as 12.40% where the biggest sales still held by Djarum Super. Djarum Black can be said is Djarum’s first portfolio in the segment “niche” where in general they like cigarettes that can be said to have uniqueness and also a different taste when compared to other clove cigarettes in domestic market.

4.8
Rated 4.75 out of 5
Based on 287 reviews
Powered by Customer Reviews plugin
Add a review Cancel reply