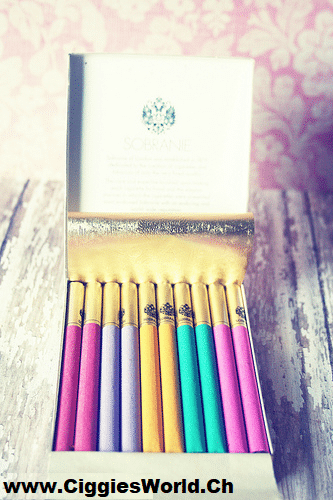 The Sobranie (Russian: Собрание, “Gathering”, “Collection”, “Assembly”) cigarette brand is one of the oldest tobacco brands in the world. Sobranie of London was established in 1879 by the Redstone family, when cigarettes had just become fashionable in Europe. Several generations of the Redstone family blended this tobacco from a secret formula. The original cigarettes were handmade in the Russian tradition. Sobranie was the supplier of royal courts of Great Britain, Spain, Romania, and Greece.

Premium varieties include the evening-out styles Sobranie Cocktail and Sobranie Black Russian, which are produced in Ukraine and as of 2005 in Russia itself. Sobranie produces several styles geared specifically for ladies, some slimmer than standard cigarettes and others brightly coloured.

Cocktails are five separate bright pastel shades with a gold foil filter, and are the same ring gauge as standard cigarettes, unlike Nat Sherman’s Fantasias, which are slimmer and use deeper, primary colours.

The logotype used on the packets is identical to a lesser version of the Coat of arms of Russia dating 1883.