Tobacco wrapped cigarettes with Charcoal Filters. 1.2mg of nictonine and 15mg of tar. 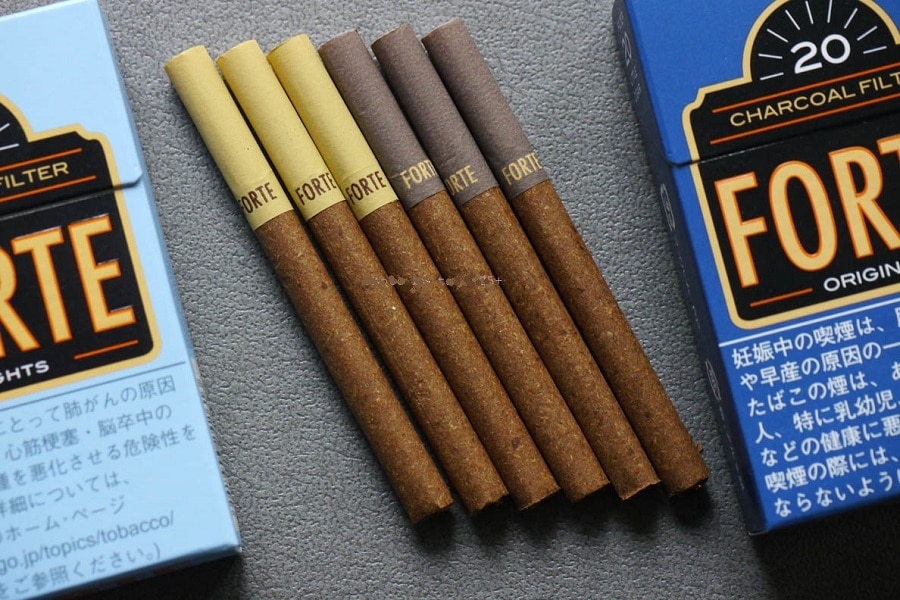 This product has the slogan “MIGHTY TINY”, which mean “Small but Strong”. The basic reason why Forte uses the slogan refers to the size of stems that tend to be slim and small (but not count as superslims), very small stem length but has a stronger and more intense sense of taste when compared to other competitors who play in the regular cigarettes category.

Forte is the first regular cigarettes portfolio of the Djarum Group for the International market (for Djarum’s own non-clove cigarettes product already has Djarum Lagunas for the American market but currently discontinued its sales, and Forte for the Japanese market) with the advantages of small diameter and stem length, strong when compared to competitors. First launched in Japan in June 2016, Forte seemed to enter the Mini SPM segment which for the Japanese market itself is still controlled by Hope, produced by Japan Tobacco. This product for the Japanese market is categorized as little mini cigars, in the sense of this cigarette in Japan regarded as a mini filter cigar, not as a regular cigarettes. This is because wrapper on cigarettes is made using tobacco sheet, which is processed using residual from the tobacco itself, which overseas counts as little mini cigars. Technical term  for wrapper used in Forte is referred to as “Reconstituted Tobacco Sheet”, or Recon Tobacco paper. This uniqueness (in size or wrapper used) makes Forte seem to be a newcomer that can not be underestimated in Japan. Forte sales counted very well and received a good enthusiastic response, given the price offered is also cheap ie only 250 Yen just to fill 20 cigarettes. Given Forte has a high level of acceptance in Japan, then finally Djarum Group began to launch Forte in Intenational market in mid-December this year 2017.

These cigarettes tend to have very small stem diameter and very short stem lengths. The length of this cigarette is only 70mm only, far below the length of regular cigarettes which has a size of about 84mm.

Right off the bat, these cigarettes tend to have a strong tobacco aroma but have a taste sensation that tends to be bland. However, when lit this cigarette has a very strong taste of tobacco taste accompanied by a little savory element typical of regular cigarettes. This cigarette seems to have little element of cocoa, where it becomes a typical flavoring of regular cigarettes that give the impression reinforcing tobacco sensation Tobacco Wrapper offered on this cigarette. It has a subtle but steady flavor character, where it uses Virginia Tobacco to create a subtle sense of taste. There is a strong natural spicy sensation that is likely to result from the addition of Burley Tobacco, which also offers a natural sweet sensation that has good intensity. It has a little nutty sensation, this is because the cigarette blend composer also uses Oriental Tobacco, but not so dominant that it can create a less nutty impression. Thanks to the addition of Tobacco Wrap on the cigarette is able to create a very strong sense of taste and has a more dominant tobacco sensation flavor compared with competitors. There is an impression of the typical cigar flavor that I can find in this cigarette, where the aroma is tend to be fragrant and the bold character flavor. Spicy sensation here tends to be in the middle intensity, in the sense that this cigarette has a character quite spicy but in good intensity. Sensation of taste in this cigarette tend to be very pleasant and also has a strong character but still maintain a distinctive smooth impression.