Srintil tobacco, recognized by connoisseurs in Bremen, Germany, as the best tobacco, only exists in Temanggung Valley in Central Java. Local tobacco farmers in Temanggung have been cultivating Srintil for centuries.

Srintil tobacco is actually an abnormality of tobacco and as such is very rare. It is grown in the Java region in Temangung Valley. It’s an aberration that only occurs occasionally to some of the plants and tobacco farmers say they have not been able to replicate it anywhere else nor can they force it to happen. The locals say it’s considered a blessing from God and because of this it’s very expensive when compared to other tobacco. It manifests itself in the malformed tops of the plant (and if you know your tobacco leafs the tops are usually where the nicotine is greatest) and produces an extreme amount of resin. Because of its potency and price it is most often used as a spice (like perique) with other tobaccos 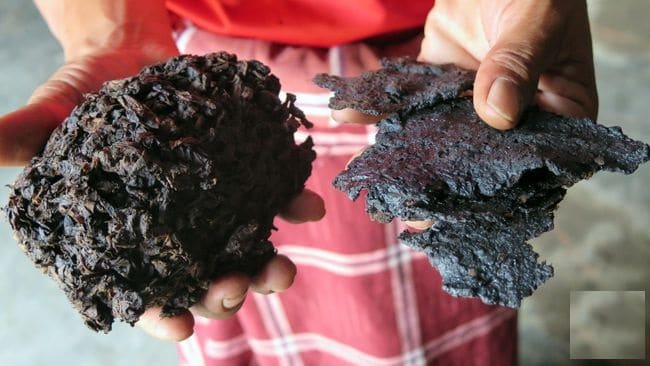 As you can see it’s very gummy looking and black. The flavor profile has a musty taste similar to other Indonesian tobaccos — and is similar to gawith twists.

My smoking notes of Srintil: It’s mixed with another burley that I can tell, it’s got fruity notes (most likely the raisin) and because of this it is slightly sweet, I would call it borderline aromatic. It does not smoke as hot per say as the Celebes Soppeng.

4.8
Rated 4.75 out of 5
Based on 4 reviews
Powered by Customer Reviews plugin
Add a review Cancel reply